If you weren’t available for dinner/dessert over the summer and you’d like to participate let us know, we’d (Synthea & I) would love to get together with you in October or whenever your available.

Do you have a delicious Chili? Bring it in a crockpot on the 9th we’ll serve it up after the worship service with judges and prizes for the top 3. Everyone will be invited to sample any or all of the chili contestants spicy or non-spicy goodness. There also might be a cornbread contest.

Speaking of education, a shout out to teachers former and present. Thank you.

There was a teacher who was helping one of her kindergarten students put his boots on. He asked for help and she could see why. With her pulling and him pushing, the boots still didn’t want to go on.

When the second boot was finally on, she had worked up a sweat. She almost whimpered when the little boy said, “Teacher, they’re on the wrong feet.” She looked, and sure enough, they were. It wasn’t any easier pulling the boots off than it was putting them on. She managed to keep her cool as together they worked to get the boots back on — this time on the right feet.

He then announced, “These aren’t my boots.” She bit her tongue rather than get right in his face and scream, “Why didn’t you say so?” like she wanted to. Once again, she struggled to help him pull the ill-fitting boots off.

He then said, “They’re my brother’s boots. My Mom made me wear them.” The teacher didn’t know if she should laugh or cry. She mustered up the grace to wrestle the boots on his feet again. She said, “Now, where are your mittens?” He said, “I stuffed them in the toes of my boots” (unknown author).

Living in the Present

During Martin Luther’s great struggle to reform the church in the 16th century, the Holy Roman Emperor sought to silence him. So he spent some lonely months in Wartburg Castle under protective custody. There, as he fought despair, Luther scribbled the words “I am baptized” on his desktop as a reminder that he was living according to an ongoing call from God. He did not write, “I was baptized” but used the present-tense verb. For he rightly understood that in his baptism, God had adopted him as his son, and no human could take that from him.

Later, in his Large Catechism, Luther wrote: “To be baptized in God’s name is to be baptized not by human beings but by God himself. Although it is performed by human hands, it is nevertheless truly God’s own act.”  —from The Wired Word

Dear friend, God may send you some valuable gifts wrapped in unattractive paper. But do not worry about the wrappings, for you can be sure that inside he has hidden treasures of love, kindness and wisdom. If we will simply take what he sends and trust him for the blessings inside, we will learn the meaning of the secrets of his providence, even in times of darkness. —A.B. Simpson

Many of us are juggling so many things that we are run by our lives rather than living them as gifts from God. What if we could learn to stop for a moment many times a day? What if in those moments we could decide to notice the sheer miracle of being alive? We would then be taking awe breaks instead of coffee breaks.

“If you feel like you’re losing everything, remember that trees lose their leaves every year and they still stand tall and wait for better days to come.”  —Unknown

Be understanding of your enemies.
Be loyal to your friends.
Be strong enough to face the world each day.
Be weak enough to know you cannot do everything alone.
Be generous to those who need your help.
Be frugal with what you need for yourself.
Be wise enough to know that you do not know everything.
Be open enough to believe in miracles.
Be willing to share your joys.
Be eager to share the sorrows of others.
Be a leader when you see a path others have missed.
Be a follower when you are shrouded by uncertainty.
Be the first to congratulate an opponent who succeeds.
Be the last to criticize a colleague who fails.
Be loving to those who love you.
Be loving to those who don’t love you; they may change.
Be yourself, above all.

You’re Made for Faith

Contrary to popular opinion, faith and doubt aren’t opposites. Instead, “doubt is a way station en route to faith,” writes J. Ellsworth Kalas. “I can’t imagine getting to faith at a grand level that raises the hair on your arms without passing through doubt to get there.”

Switching metaphors, Kalas explains, “Faith is an edifice in which some of the grandest parts are the various stones and mortar of doubt.” Christians need not worry about doubt, which is “the stuff that goes into the building of faith.”

The real enemy of faith is unbelief, but it’s not a fair fight, says Kalas. Because humans “are made for faith … unbelief is always an intruder, always working against what is magnificently native to us.”

Surround Yourself with Love

Wrap us in your warmth like a quilt, O God of love. As days grow colder in the northern hemisphere, make our hearts burn with your love for one another. 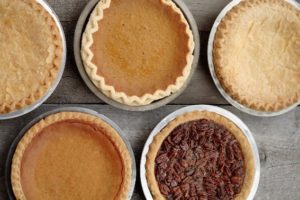 Give $5 Pie Drive for the Grafton Food Pantry

Your $5 donation during the month of October buys a pie for a family in need this Thanksgiving!

Put your $5 in the pie plate. Put your name or note on a sticker. Put your sticker on the message board.