One day in 1852, about a dozen people got together and organized The First Congregational Church of Huntley. This church was sponsored by the churches of Elgin, Dundee, and Udina. Rev. Shapley was asked to invite the ministers of these churches to help organize this new church. This church was started on September 11, 1852. The articles of faith and covenant of the church of Stockbridge were read and approved and adopted. On June 29th of 1853 a church meeting was called, to elect a building committee. The following were chosen, T.S. Huntley, G. Smith, and James Winnie. This building was to be 36 feet wide and 50 feet long, with a gallery across one end and a belfry on it.

For some time however, this building project was stalled and their meetings were held in the school house. In 1863, it was voted to go ahead with the building of this new church, and a deal was made between this church and Mr. George Dorby to build this building at a cost of $620.00. The sills in this structure are hewn logs, 8’ x 8’ x 36’ in length. These logs came from the Seen property right here in Huntley. These same sills are in this church today. It is interesting to note that even though the Civil War was then raging, it did not stop these faithful people from going on with their building program. 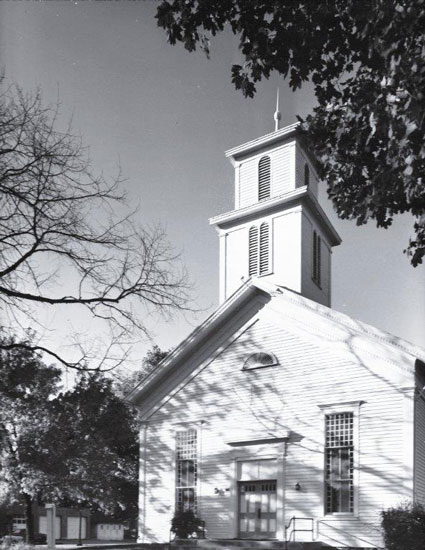 This church was built according to the plans that were presented in 1853. Mr. Huntley gave the old parsonage to this church in 1885. There were two other groups of Christians worshiping here in Huntley, in homes, and they joined our church in 1872. In 1922 the first choir was started by Rev. and Mrs. Young. In 1942, an electric organ was purchased from the legacies of Mr. A.B. Brinkerhoff and Mr. B.A. Streeter.

In 1946, a new constitution was read and adopted. In 1951, the interior of the church was remodeled. A new altar, lectern, pews, pulpit, dossal, the floor was covered with carpet and a new heating plant was installed. We also changed from two aisles to lone center aisle. The newly remodeled building was dedicated on December 3, 1951.

In 1952 we celebrated our 100th anniversary with a dinner served by the Methodist Church of Dundee. It was held in the old high school gym. The place was packed with people and the dinner was excellent. In 1957, a new social (fellowship) hall was built and dedicated. It was built at a cost of $87,000.00.

In 1964, Helen Marlowe and Nancy Johnson attended a handbell concert at the Second Congregational Church in Rockford, and Mr. Litterest their director made recommendations as to the size and type of bells to purchase. They then ordered a set of three octaves of handbells from the Whitechapel Foundry of England.

In 1967, we were given a used pipe organ, which we had repaired and installed at a cost of about $29,000.00. In 1971, the church was remodeled with a basement being put under it and an adjoining room, which now is called the choir room and a hallway which leads to the social hall. We also added a new entrance or Narthex. We put new siding on the church and a new cross on the steeple. This was done at a cost of about $76,000.00.

In 1985 another three octave set was given in memory of Henry Marlowe.

In 1999, we purchased a new sound system for the sanctuary.

In August 2000, we purchased the Mercuri property……our “Field of Dreams.

In 2000, the sanctuary was air conditioned.

In June 2006, we purchased the old school apartments.

In June 2009, the church constitution was revised.

In 2013, the church constitution was updated.

In 2014, we celebrated our 150th anniversary of the church building, let us be grateful to those first Christians who founded our Huntley church.  With the help of the Almighty God, may we do all we can to keep this church as a Beacon Light to those that are to follow us in this community of faith.  We pray that this church may ever grow in strength and knowledge of our Lord Jesus Christ.