Do we take the time to think and pray for others?

A voyaging ship was wrecked during a storm at sea and only two of the men on it were able to swim to a small, desert like island. The two survivors, not knowing what else to do, agree that they had no other recourse but to pray to God. However, to find out whose prayer was more powerful, they agreed to divide the territory between them and stay on opposite sides of the island.

Soon the first man prayed for a house, clothes, more food. The next day, like magic, all of these were given to him. However, the second man still had nothing.

Finally, the first man prayed for a ship, so that his wife and he could leave the island. In the morning, he found a ship docked at his side of the island. The first man boarded the ship with his wife and decided to leave the second man on the island. He considered the other man unworthy to receive God’s blessings, since none of his prayers had been answered.

As the ship was about to leave, the first man heard a voice from Heaven booming, “Why are you leaving your companion on the island?” “My blessings are mine alone, since I was the one who prayed for them,” the first man answered. “His prayers were all unanswered, and so he does not deserve anything.” “You are mistaken!” the voice rebuked him. “He had only one prayer, which I answered. If not for that, you would not have received any of my blessings.” “Tell me,” the first man asked the voice, “what did he pray for that I should owe him anything?” “He prayed that all your prayers be answered. “For all we know, our blessings are not the fruits of our prayers alone, but those of another praying for us. When Jesus died on the cross he was thinking of you!

3 Do nothing out of selfish ambition or vain conceit. Rather, in humility value others above yourselves, 4 not looking to your own interests but each of you to the interests of the others.               Philippians 2:3-4 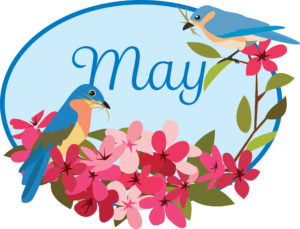 More than 150 years ago, Memorial Day took shape amid the backdrop of the U.S. Civil War. Before it ended, women began decorating the graves of fallen soldiers. In 1868, when May 30 was designated as Decoration Day, loved ones placed flowers on the graves of Union and Confederate soldiers alike.
By 1882, Decoration Day became known as Memorial Day, and soldiers who died in other wars were honored too. Over time, it became a day to remember all loved ones who have died — in war and otherwise. In 1971, Congress declared Memorial Day a national holiday to be observed on the last Monday in May. On Memorial Day, we pause to remember people who made the ultimate sacrifice for their country and for our freedom. We also pray for those who continue serving, especially those in harm’s way.

Sing praise to our Creator God!
Earth prospers from the way
God “mothers” each new child into
This world day after day.

God fabricates in motherhood
A channel from above
That longs to share with every child
God’s comfort, grace and love!

Sing praise to our Creator God,
Who “mothers” us from birth!
Providing what we truly need
Throughout our lives on earth.

Our world hangs like a magnificent jewel in the vastness of space. Every one of us is a part of that jewel, a facet of that jewel, and in the perspective of infinity, our differences are infinitesimal. We are intimately related. May we never even pretend that we are not. … Deep down, we know that what matters in this life is more than winning for ourselves. What really matters is helping others win too, even if it means slowing down and changing our course now and then. …

[Roman philosopher] Boethius wrote this sentence: “Oh happy race of mortals if your hearts are ruled, as is the universe, by love.” … [There is a] deep part of you that allows you to stand for those things without which humankind cannot survive: love that conquers hate, peace that rises triumphant over war, and justice that proves more powerful than greed. So in all that you do, in all of your life, I wish you the strength and the grace to make those choices which will allow you — and your neighbor — to become the best of whoever you are.

As summer approaches, you may look forward to a more relaxed routine. But don’t discard all your good habits and commitments! For soul care, try fixed hours of prayer. Simply expand the concept of praying at set times (such as before meals and bed) into praying regularly each morning, midday and evening. Set an alarm on your watch or phone and commit to engaging with God at the specified times. You can do this on your own or with family or friends.

You can pray using Scripture verses, devotional guides, the Book of Common Prayer or a resource such as ExploreFaith.org. (When I’m tired or overwhelmed, it’s helpful to pray someone else’s words.) You might want to pray the same prayers morning, noon and evening for a week or a month. This practice isn’t meant to replace spontaneous prayers. Instead, use fixed hours of prayer to nurture a consistent habit of conversing with God.

“If you want your children to listen, try talking softly to someone else.”  Ann Landers